If you weren’t in the Bay Area last May, or otherwise missed the radio programs where Sarah discussed her Rocked By Women show, here are the links. Enjoy the “broadcasts”!

This week on Open Air, host David Latulippe’s guests are: Lisa Steindler, the Artistic Director of Encore Theatre Company, and actress Taylor Jones, who stars in the world premiere of Hookman, a new play by Lauren Yee, at Z Below in San Francisco. Also visiting is Sarah Bush, artistic director of the Sarah Bush Dance Project and the creator of Rocked By Women, a 75-minute multimedia dance theater performance with original composition and sound design by Julie Wolf, this weekend at the Malonga Casquelourd Center for the Arts in Oakland; regular contributor Janos Gereben takes a look at ethnic music around the Bay, and about Romeo and Juliet at the San Francisco Ballet; and critic at large Peter Robinson previews Shakespeare productions that are coming up this summer around the Bay Area.

“Out in the Bay” KALW 91.7 FM
(Aired 7pm, May 7, 2015. A weekly half-hour radio show)
“Rocked By Women” rocks Oakland May 9 & 10
Rocked by Women is a multimedia dance theatre performance in Oakland that celebrates women’s music and its influence over nearly half a century — music by the likes of Cris Williamson, Holly Near and Ani DiFranco that helped Rocked by Women creator and choreographer Sarah Bush and many other lesbians come out. Eric Jansen speaks with her and director Becca Wolff, and they play music from the production.

Other Press Coverage for Rocked By Women:

SF Chronicle, May 3-9 Datebook:
Featured in the “pink section” calendar 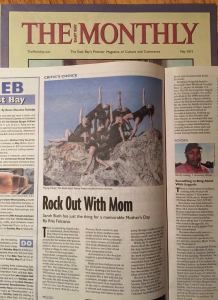 #dancingwithfriends #sixfootwingspan #getoutside #outdoordancing #danceontherocks #wings #joy
I’m grateful to be a dancer, with this opportunity to process emotions through my body, to continue to learn more about myself and others through art-making. Our second day of filming culminated in the adrenaline rush of walking into the chilly waters of the Bay. I had prepared for and anticipated the cold, the unknowns of the depth and texture of the ground below my increasingly weightless feet. What I did not anticipate was the peace, the steady strength of forward motion I would find, the sense of ritual, the power of emerging, and then, numb to the cold, the urge to twirl, hair flinging, shedding droplets of water from my body like scales, like skin, like armor.
When I described the visual images and storyline that came to me for her song Year Gone By, Katie said it gave her chills and she was 100% onboard with bringing it to life. Cinematographer Sara St Martin Lynne joined the team as our third co-director and with editor Steve Holloway, stylist Margaret Bolton Grace, and loads of generous supportive friends, in February we made the whole thing in basically two weeks.
Last November Katie proposed, “If you could make a video for any song on my Gift Horse album, which song would it be?” (!!)
Following Wednesday’s 6pm Year Gone By music video premiere, join Sarah Bush & Katie Cash in a conversation about co-directing and creative process. (#notesnjokes !!) We’ll be interviewed by Waxsimile Productions record label Co-Founder Briget Boyle!
Falling for Springtime Farm-dances with Friends 🌿🌿🌿 #sixfootwingspan #ranchocompasion