(This article originally appeared in the print publication of The East Bay Express)
May 06, 2015 – Arts & Culture » Dance

Choreographer Sarah Bush pays homage to powerful female voices through her personal story of coming out. 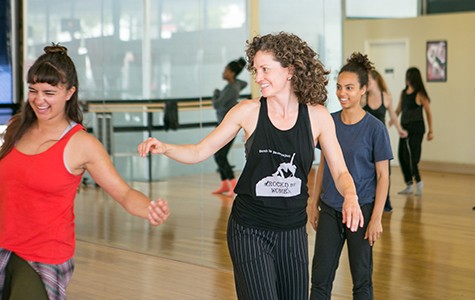 Sarah Bush was born in 1976, right into the empowered melodies of the Women’s Music Movement. Her mother was a second-wave feminist, and she filled the house with the visionary female voices of her time: Cris Williamson, Meg Christian, and so many others. “My lullabies were from this new art form of women’s music,” said Bush in an interview. “It was lyrics that were telling stories about women, from the perspective of women, and the music was made entirely by women.” Early exposure to those feminist role models ultimately shaped who Bush is today.

Now, she runs Sarah Bush Dance Project, a small Oakland-based contemporary dance company with a focus on expressing female perspectives. She choreographs performances throughout the Bay Area year-round, but for the last few years, her annual highlight has been choreographing Rocked by Women — a production for women, about women, entirely by women. The elaborate performance, with heavy theatrical leanings, is a tribute to the network of women who have nurtured her throughout her life, from close friends to famous musicians. This Mother’s Day weekend, Bush and her company will be performing the third edition of the production — but the first in Oakland — at Malonga Casquelourd Center for the Arts (1428 Alice St., Oakland).

The show’s narrative loosely follows Bush’s personal history, with dances set to the music that influenced her at various points in her life. When she was sixteen, she came out as a lesbian, and was emboldened by the fearless female vocals of Tracy Chapman, the Indigo Girls, and Ani DiFranco. Later, she moved to the Bay Area and joined Dance Brigade, of which she has been a performing member since 2001. Through the female dance company, she found yet another group of queer and feminist women who made her feel at home. Then, she was invited to perform at the famous Michigan Womyn’s Music Festival. Standing face to face with some of the voices that had cradled her in her childhood, Bush came into her own, meeting them as an artist ready to collaborate. Among others, those crucial life experiences make up the storyline of Rocked by Women.

The production wasn’t always so personal. When it was initially commissioned for the National Queer Arts Festival in 2011, it was a pastiche of original interview sound clips from pioneers, including Holly Near and Judy Dlugacz, founder of the elemental feminist music label, Olivia Records. Although the show was well received, she needed to infuse it with more of her own story to make it cohesive. “Sometimes, you make the most universal work by being the most personal,” said Bush. “By distilling the story down to moments of emotional truth for my life, that does seem to resonate with audiences.”

Last year, Bush brought on award-winning theater director Becca Wolff, to help her make the story easier to follow and develop a movement vocabulary that’s an accessible hybrid between theater and contemporary dance. This year, she’s going even further by minimizing her dancing role in order to act as a narrator. Bush hopes to produce something that’s widely relatable, so she wants to ensure that it’s not too abstract.

To add atmosphere to the show, Aarin Burch created a video design that will project settings for Bush’s six dancers — from San Francisco’s Club Q to the Michigan Womyn’s Music Festival. With an original score and sound design by Julie Wolf on top of that, the performance won’t be a typical dance recital. It should be an opportunity for audience members to reminisce about their own past — recognizing women who have played influential roles in their own lives.

After the show, more inspirational women will contribute their stories. Those will include Judith Smith (founder and artistic director of Axis Dance Company), Lenn Keller (artist and founder of the Bay Area Lesbian History Archives Project), Kinfolkz Anderson (founder of Spectrum Queer Media), and Linda Tillery (singer and founder of the Cultural Heritage Choir as well as staff artist for Olivia Records).